Whenever I travel, I always have some vision of the country I’m visiting. It’s created from movies filmed there or photos I’ve seen, from stories I’ve heard and music born there. Scotland is no different and I can see a Tartan plaid, hear the bagpipe music and smell the fresh Highland air.

Every country has its own culture and heritage, with some unique customs and some shared with neighboring or related countries. This culture and the events that surround the customs can be a major reason for visiting the country. What are some of Scotland’s events and customs? 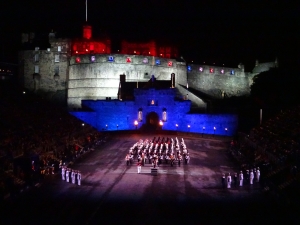 The most famous is Edinburgh’s Military Tattoo. This festival held during the month of August (actual dates vary by year) is a celebration of music and performances not just from Scotland, but this year from four different continents with over 1000 performers. There are performances every weekday evening, with two on Saturdays and none on Sundays. The highlight is the massed pipe and drum bands joining with other military bands at the end of the evening, closing out the day. The performances are held at the esplanade of Edinburgh Castle and tickets have been sold out in advance of each year’s festival for the last 10 years. PLAN AHEAD!!

There are also local festivals held year round called the Highland Games. If you’re traveling to Scotland, check the dates you will be in certain towns and see if there are any Highland games in progress. This is true local culture and a great way to become a part of the local story.  Perth has the most popular events including track events, tug of war and piper competitions. What more could you need to be entertained by the Scottish?

If we’re talking Scotland, we have to include golf. Many claim that this is where the sport was born, with St. Andrews old course being considered the “home of golf”. There were only three courses in Scotland used for the historic “Open Championship” between 1860-1890 and Mary Queen of Scots is reported to have played the Musselburgh links in 1567. Now THAT’s history!

Then, there’s FOOTBALL…. OK, soccer for those of us in the US, but it really is a mainstay of Scottish culture. Can you guess who their main rival is? England of course, as they have been rivals in EVERYTHING for centuries! They also compete in rugby and if you haven’t heard of shinty, it’s similar to our field hockey sport.

Another aspect of Scottish culture is the unique Holidays. They share Boxing Day with England and Ireland (as well as other former British colonies) and it’s become a big post Christmas shopping day.

Unique to Scotland is Burns Night, celebrated on January 25th to celebrate the works of Scottish poet, Robert Burns. Internationally known for composing “Auld Lang Syne”, he also wrote a poem to honor the local dish of Haggis, which is read at formal dinners on this evening in memory of the poet.

St. Andrew’s Day, Scotland’s National Day is celebrated on November 30th and honors the death of Scotland’s patron saint. Shared with other countries that hold St. Andrew as their patron saint, Scottish tradition includes local food, music and dance as part of their celebration.

No matter when you visit Scotland, you will find the tradition and culture of the country evident in everyday life. If you are looking to experience certain festivals, holidays or sporting events, it’s always best to check with your travel professional and your calendar to see if you can’t make your dreams come true!