In the not so recent past, Northern Ireland was not necessarily known for its gourmet food. Traditional and simple dishes were standard fare, many with seafood and most with potatoes of some variety. 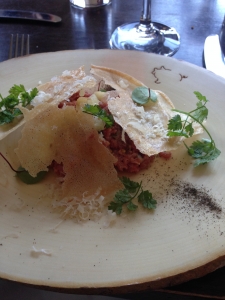 However, having just returned from a trip through Northern Ireland, I am happy to report that if gastronomy is your delight, you will be pleasantly surprised with the country’s updated menus and upscale restaurants!

You can choose your fare, from simple pub food to elegant four course dinners in a variety of cities. Fish and chips, Irish stew and steak and Guinness pie are some traditional meals. They are all hearty and tasty and often served with a brown bread with butter. You may also want to try the local sausages, both links and patties made of different ingredients but well spiced and tasty.

The traditional Boxty is a potato based dish, created with a mixture of mashed and shredded potatoes formed into a loaf and boiled, then sliced and fried with bacon. We had them shaped into large pancakes, fried and then filled with meat and gravy and folded over to create a pocket. 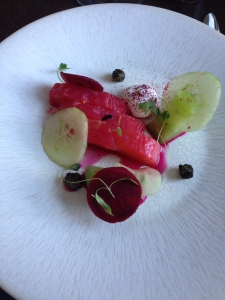 Seafood is very popular in Northern Ireland and its freshness makes all the dishes wonderful. My favorite was a seafood chowder enjoyed at an old local pub, again served with brown bread and butter. In finer restaurants you can sample mussels, haddock, flounder and salmon, all cooked in a variety of ways with delicious sauces to enhance the flavors. In finer restaurants you’ll find duck on the menu as well as some chicken dishes, but they are not as common.

If you’re a meat lover, fear not, there are steaks on the menu as well. Although not as popular in the north, restaurants choose a high quality beef and prepare it to order, just like home. If you’re a lamb lover, there is plenty of opportunity to enjoy this meat in stews or roasts baked to perfection. Potatoes always round out the meal, either mashed, boiled or fried. As for vegetables, carrots and onions are the most popular but broccoli and salads tend to be on the list as well. 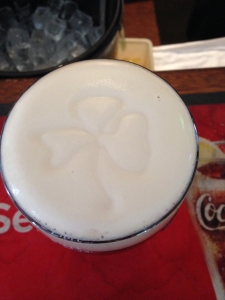 But what to drink?? I’m sure it would shock you to hear that beer, much of it Guinness, is consumed by the pint with lunch and dinner. There are other local brews and hard ciders, like Bolmers and of course it wouldn’t be Ireland if there weren’t some Irish whiskey consumed.

Northern Ireland is home to the Bushmills Distillery, said to hold the oldest whiskey distilling license in all of Ireland, granted in 1690. We toured the distillery, which was interesting and impressive, as it’s still a working distillery. In order for a whiskey to be labeled an Irish whiskey, it must be aged in barrels for at least 3 years and one day in Ireland. There are many brands and distinctions, but Bushmills is the pride of the North!

And to end your day, don’t pass up the Irish coffee! Brown sugared coffee with a shot of Irish whiskey and topped with cream is sure to cure whatever ails you and leave you with great dreams!

If you’re thinking of a trip to Northern Ireland, I hope we’ve allayed your fears that you would only be eating potatoes and drinking Guinness. The culinary world has moved into Ireland, both North and South making great changes to what you may dine on while traveling there.