I am currently sitting in Belfast in Northern Ireland and experiencing the custom of an afternoon tea! That will soon be replaced by a pint or an Irish whiskey, but I thought I should share a little of what we’ve experienced so far on our trip to Northern Ireland before I move on! 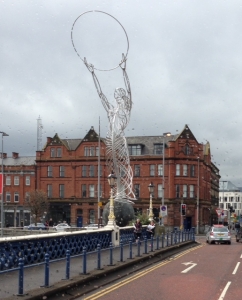 The Beacon of Hope

It may be a small country in area but it’s certainly large in culture, history and local celebrations. Being part of the UK, it shares many of the same customs as Scotland, England and Wales, but with an Irish twist.

Most well known in previous years for its political unrest, today there is peace among the Protestant and Catholic communities, the republicans and loyalists, and for the most part the economy is growing. The city of Belfast has numerous symbols of this peace, one of them being a sculpture on the Queens Bridge called the Beacon of Hope.

The locals are friendly and generous, always happy to share a smile and a story! The Northern Irish are also proud people, as shown by the opening of the Titanic Museum in Belfast in 2012. The ill fated ship was built in Belfast and the quality and craftsmanship is what the people are so proud of. As our guide told us, when asked why they are so proud of a ship that sank, the resounding answer is, “It was fine and well when it left Belfast!” 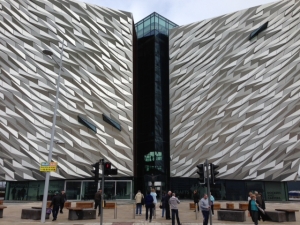 Being a majority Christian, the holidays of Christmas and Easter are largely celebrated, and being part of the UK, Boxing Day and the May Day Bank Holiday are also shared. Knowing about these holidays is helpful if you are traveling so you are prepared for the banks and some shops to be closed.

If you’re looking for traditional or special events to experience, you might consider coming in early May when Belfast holds the Festival of Fools, an annual international street theater festival. With acrobatic performances, theater works and comedy, there is something for everyone that is sure to put a smile on your face.

Perhaps you’d rather come in July and be a part of the march on Orangeman’s Day on July 12th. Although marches run from April through September, the most significant held on July 12th commemorates the Battle of the Boyne, held on July 1, 1690. Although the dates are different, historians claim that it’s due to the change from the Julian to the Gregorian calendars and not an actual change of date.

If you’re a music lover, you may consider the Feis Dhoire Cholmcille which is the largest celebration of Irish musical culture held in Derry. 3 days of performances in 3 different venues offers artists who compete in music, theater and dance. Held in April, this traditional event is over 90 years old and continues to grow in popularity.

Whether you are looking for history or art, beautiful landscapes or a great story, Northern Ireland offers it all!