When you think of Northern Ireland, Belfast is certainly at the top of the list. The capital and largest city of the country, it’s not surprising that it’s the first to come to mind, but Northern Ireland goes beyond Belfast!

The city of Belfast was voted one of the top destinations to visit in 2012 with the opening of the new Titanic Belfast museum. The birthplace of the ill-fated cruise liner, this museum is now a memorial and a main attraction. With nine galleries and interactive exhibits, it is truly a new icon to be explored.

If you’re looking for castles and cathedrals, Belfast has both. Belfast Castle is located in the northern part of the city and adjacent to Cave Hill Country Park, host to gardens, a playground, a visitor center and trails to wander. Belfast Cathedral is also located within the city, its construction beginning in 1899. It is host to numerous stained glass windows, mosaics and fine needlework.

Need a bit more fun? Visit the zoo or perhaps Belfast’s answer to Willie Wonka’s Chocolate Factory, Aunt Sandra’s Candy Factory. Using 100 year old recipes, this working factory allows all senses to be engaged while guests watch candy being made in the sweet scented air and samples are waiting to be purchased.

Next a trip to Londonderry (Derry), the second largest city in Northern Ireland and the oldest fully walled medieval city in all of Ireland. Walking the 17th century walls gives an overview of this city’s history and heritage. Fast forward into the future and walk across the pedestrian Peace Bridge, which spans the river Foyle. This bridge is used not only to connect the two sides of the river, but also as a venue for celebrations and charity events. 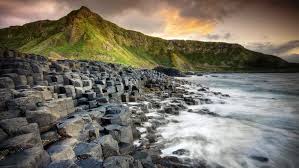 The Giants Causeway is another iconic site in Northern Ireland. The columned rock formations stretch into the water and come out on the other side in Scotland. Legend says it was the walkway between the countries for the giants of old, scientists say it was volcanic activity and the heating and cooling of the basalt rock. You decide!

Feeling adventurous and not afraid of heights? Visit the Carrick-a-Rede rope bridge, spanning 65 ½ feet over a 75 foot drop to get to Carrick Island. What’s your reward? An awesome view and the return trip!! We recommend visiting the Bushmill’s Distillery for fine Irish whiskey AFTER the bridge crossing!

Drive the most northern part of the Atlantic Wildway that starts in Northern Ireland in Londonderry and proceeds around the Inishowen Peninsula and down the western coast of Ireland. The beautiful cliffs are worth the sometimes wild winds and changeable weather. Here you will cross between Northern Ireland and the Republic of Ireland and find some of the most stunning views along with an understanding of the need for a heavy woolen sweater!

Whether it’s the lakelands or the hills, the wild coastline or the cities, you are sure to find beauty and adventure during your travels in Northern Ireland.