Traveling to Germany brings with it the anticipation of enjoying traditional foods from different parts of the country. Traditional recipes have a way of transforming into familiar meals when brought back home though. Did you know that some of OUR favorite fast food items originated in Germany? Our hamburger started as Hamburg’s meat rissoles, a mixture of meat, potatoes and spices breaded and fried. The all-American hot dog is really just a different twist of the wurst on rolls sold at many open food stalls and in biergartens.
Geography has a way of dictating what is popular in an area and Germany is large enough to have several regions with different specialties. In the north, where it borders both the Baltic and the North Seas, it comes as no surprise that seafood and fish stews are popular. In the south, the Bavarian region that borders Austria and Switzerland, popular fare are wursts and pretzels and my favorite, maultaschen which is a German form of ravioli.

If you are a big breakfast fan, you will love your visit to Germany! The breakfast served in most hotels consist of meats and cheeses, hard boiled eggs, breads, jams and strong coffee. You will sometimes see tomatoes and some fruits, as well as oatmeal and muesli. You will not go away hungry!

Pork is very popular in Germany, as well as beef and chicken. Sausages, or wursts, of MANY varieties depending again on region, can be found both as a walk away small meal on a roll or a sit down dinner including potatoes and cabbage or sauerkraut. I prefer the weisswurst or the Nuremberg sausages direct from the outdoor grill! Breading and frying pounded, boneless meats is also popular, called schnitzel. It can be made from pork, veal or chicken and served with potatoes and red cabbage for a delicious meal. It is also often served with a side dish of spaetzle, the famous homemade noodles made from boiled dough and then fried in butter and seasonings.

Of course, with all the wonderful food comes the wonderful beer that Germany is so famous for! Many small towns have their own breweries with their own brands of micro-brews. In Upper Franconia, they have the highest density of breweries per capita than anywhere else in the world.

Wheat beer is very popular and quite different from our American filtered beers. Cloudy with yeasty sediment in the bottom, this beer is thought to be one of the oldest known types of beer. Each beer has its own glass type and 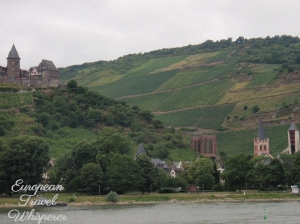 often each brewery has its own labeled glass for the beer produced there. You can spend an entire vacation in Germany just sampling different brews to choose your favorite.

With the Rhine River flowing through Germany, wine production is also part of its heritage. Dating back to Roman times, especially the Rhine river gorge produces the white Riesling in abundance. This crisp, fruity white wine can vary from sweet to semi-dry and is a favorite among locals. Red wine is produced in much smaller proportions to white, with the pinot noir being the most well known.

Whether you would like to sample every wurst, schnitzel, beer or wine in Germany, you will likely not be disappointed. But remember, save room for dessert so you can sample the original Black Forest cake or an authentic piece of apple strudel!!