German culture is that beautiful and unique mix of precise efficiency and downright fun! This is evident in the layout of each city, the timeliness of the German train system and the celebration of each festival, complete with costume, song and usually beer! Traveling through Germany will allow you to take part in many of their local customs.
Oktoberfest, for instance, is one of the largest tourist “attractions” for the country. This is an opportunity to truly mix with and experience the local culture during the 16 day event. Starting in late September and running through the first weekend in October, many towns have their own local events. Munich is known for holding the largest Oktoberfest where you can dine on pretzels and wursts, drink beer by the liter and listen to Bavarian bands late into the night.
The country is comprised of almost 70% Christians, and therefore the holidays of that religion are also important. Christmas, St. Stephen’s Day (the day 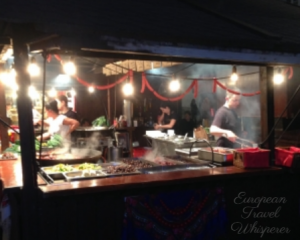 after Christmas) and Easter all have special significance. Carnival is the celebration bringing us up to Lent in the Christian calendar. Cologne has a large celebration with parades, costumes and entertainment spanning several days. The biggest highlight is the parade on Rose Monday with floats and people in costumes traveling 6.5 kilometers into the cathedral square. This is a family event, with flowers and sweets thrown to the children in the front row. 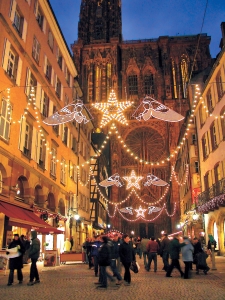 With Christmas Markets scattered throughout the whole country, they’re hard to miss. Walk the streets, enjoying the sights of the twinkling decorative lights, the sounds of merry children and the smell of glögg wine. Generally held in the town square, the streets are lined with open stalls that have so much to offer. Vendors have items that may include traditional ornaments, gifts, handicrafts and fresh food.
Another traditional festival held in the Rhine region is the Duerkheimer Wurstmarkt. This festival, which is over 590 years old, is held in September in the town center near the Giant Cask. This is the largest wine cask in the world and holds a restaurant inside. The event boasts entertainment and a selection of over 300 different wines that can be sampled from over 50 venues. It also has a large traveling fair for the whole family to enjoy.
The German culture is clearly family centered. I remember visiting a small town in Germany and falling in love with their idea of a weekday summer evening. So many parents walking through parks with their children, ending up in the local Biergarten with friends to enjoy the wursts and beer while the children played in the playground….yes, the one right IN the biergarten. Germany has something for everyone!