Have you heard the term “rude Americans”? Do you ever wonder where that term and stereotype came from? It’s not something I want to be known as, so when I started traveling to France, I decided to do some research to find out how to avoid being labeled that way. It was eye opening! I’m sure it’s not only France, but all countries, that have such different cultures from ours and we should learn a little about them before we travel there.

It’s not that difficult now with the internet to do a little research on the culture of the country you’re traveling to. For me, because France is such a passion, I did read a book written by a French Canadian couple that decided to move to France to understand and write about what the cultural differences were.

Here is the biggest difference I found. When you are meeting someone for the first time in a social setting, what might be the first couple of questions you ask? What’s your name? What do you do for a living? That’s very standard in the United States. But in France, that’s considered personal information and you’re being a bit rude to ask. They would prefer to talk politics and global topics, invite you in for food and wine before they need to know your name.

When you enter a small shop in the US, do you want somebody to come right over to see if you need help? Generally you’d prefer to browse on your own and will seek help if needed. In France, their shops are an extension of their homes (not necessarily literally) and they expect a “hello” (bonjour) when you enter and perhaps a “how are you” (comment êtes-vous). To not acknowledge the shop owner is rude in France and saying “goodbye” (au revoir) and “thank you” (merci) are equally important.

These are some very basic differences and if you did not know these customs, you might be considered a “rude American”. And the opposite is also true, I’ve often heard people saying the French are rude. But if you are acting like an American in France, they might be offended and act a bit put off, right? Respecting the culture of the country you are visiting is the easiest way to make your travels more enjoyable.

France is a country with a majority of Roman Catholics. Not surprising, since the Papacy was based in Avignon, France for almost 70 years during the 14th century. That said, many of the Christian Holidays are big celebrations in France.

One of their largest non-religious holidays is Bastille Day, celebrated on July 14th. This marks the historic taking of the Bastille (prison) in Paris which commenced the French Revolution. There are parades, parties, picnics and 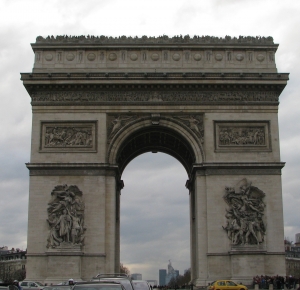 The French also celebrate WWII Victory Day on May 8th every year. This was the date in 1945 when Charles de Gaulle announced the end of WWII in 1945. There are some parades and memorials, along with church services to celebrate the victory and commemorate the losses of the war.

One of the most well known events in France is the bicycle race known as the Tour de France. A 21 day race held mostly in June, this is a grueling 2,200 mile race through the country, including farm lands, hilly countryside, mountains and even several high altitude stages. The support for the race is worldwide, but the French are very proud of hosting it.

France is also known for its gastronomy – amazing food – so you can imagine there are many food festivals, local food markets and great cooking related events throughout the year. There are also large music festivals, including the Five Continents Jazz Festival held in Marseille in July. This 10 day event offers a celebration of Jazz music in different venues throughout the city.

So if you’re traveling to France, remember to say hello and thank you in French to the shopkeepers. If you don’t speak French, please learn the phrase “Parlez-vous Anglais?”, which is simply “Do you speak English?”, it will get you MUCH better results than if you ask it IN English. And don’t forget to appreciate the local markets and festivals while you are there. They are a great and very enjoyable part of the French culture.